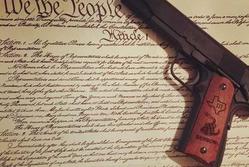 A registered non-profit organization dedicated to the safe and legal carry of firearms ​in the state of Texas in accordance with the United States and Texas Constitutions and any applicable laws.

Our purpose is to:

1   Educate all Texans about their right to carry in the State of Texas;

2   Condition Texans to feel safe around law-abiding citizens that choose to carry;

4  Foster a cooperative relationship with local law enforcement in the furtherance of these goals          with an eye towards preventing negative encounters, while defending our rights.

"Arms in the hands of citizens may be used at individual discretion in private
​self defense." - John Adams

"Open Carry" is the name of the organization, but fundamentally, we believe in "Constitutional Carry." The Second Amendment to the U.S. constitution states, "A well regulated militia being necessary to the security of a free State, the right of the People to keep and bear arms shall not be infringed." We believe laws restricting how firearms are are kept or carried is an infringement to this right.  Hundreds of thousands of Texans carry, (with an expensive license) but Texas is one of only 14 states that requires that permission slip to do so. If you can legally own a gun, you should be able to carry it openly or concealed without begging for government permission.